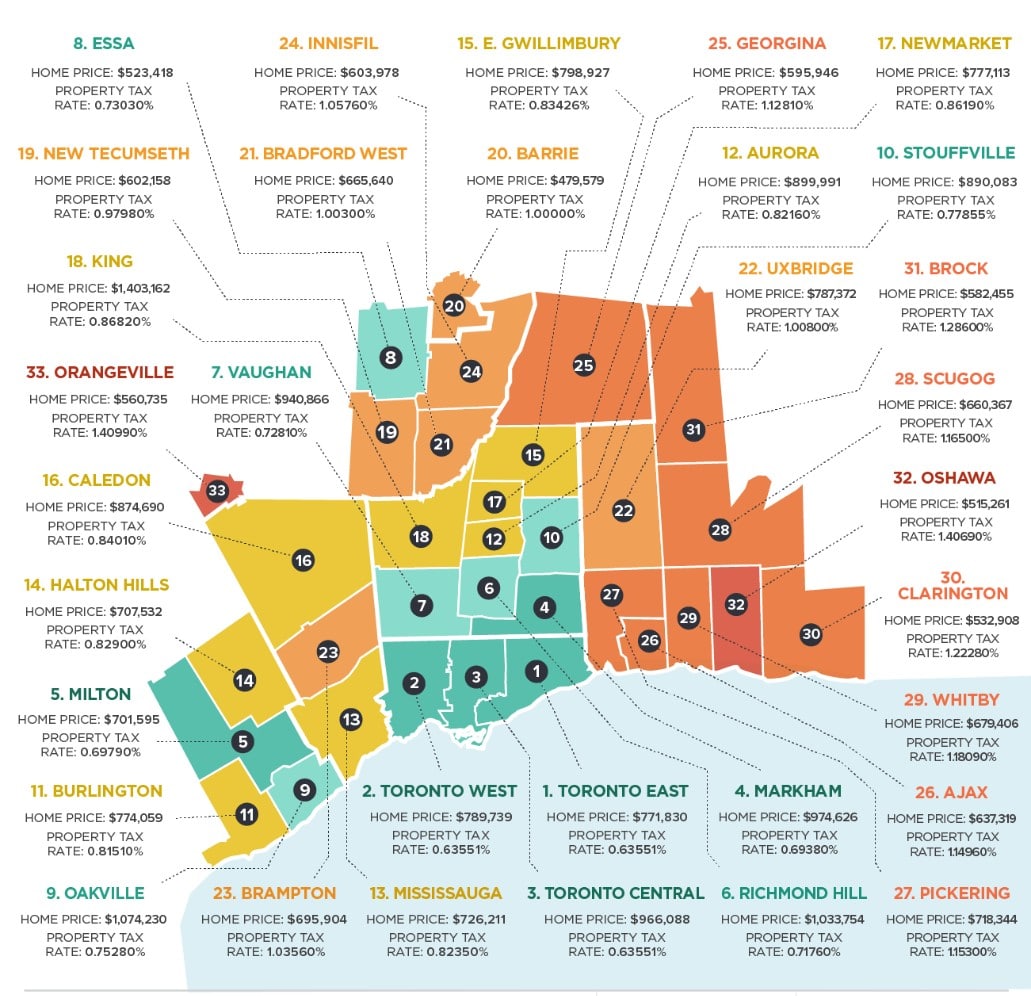 Either you are currently living in Ontario or considering moving to Ontario, you might wonder which cities have the highest and lowest property taxes in Ontario. Property tax rates in Ontario range between 0.59% and 1.78% of your home assessed value. Wonder which city’s rates are the lowest?

How is Ontario’s Property Tax Calculated?

The assessed value of a property determines how much its property tax will be.

In Ontario, the assessed value of properties is done by the Municipal Property Assessment Corporation (MPAC), which uses factors correlated to the market price to determine this value.

Which City Has the Lowest Property Tax?

When comparing the property tax rate in other Ontario cities e.g. Windsor, at 1.78% of home prices (for a home valued at $500,000 you would pay a property tax of almost $9,000) to that of Toronto; you need to also consider that Windsor has a less dense city structure and lower real estate prices.

Although the property tax rate in Toronto is one of the lowest in Ontario, it is still not as low as Vancouver’s property taxes. One reason for Vancouver’s low rates could be its mild weather. While cities in Ontario generally require more maintenance during its cold winter, British Columbia’s weather means it would need little maintenance, thus it has less need for property tax.

Recently however, Vancouver’s home prices have grown significantly, and their growth has been faster than any cities in Canada in the last 10 years.

Toronto homeowners often feel like the low tax rate is good news, but it comes at a cost: the cost of poor city service provision e.g. the Toronto subway system, road networks, and recreational facilities.

If Toronto increases property tax so as to spend more on infrastructure e.g. fixing the city’s subway system, increasing the number of highways, it would be a step in the right direction, as the number of highways almost has not been increased within the last decade in spite of significant population growth.

Getting Top-Tier Remodel Outcomes For Bottom-Dollar Prices Remodeling your kitchen can represent a...

How To Get The Best Return On Investment In Real Estate

One of the best ways that you can increase your wealth is through real estate investment. Although...

Time, Research, And Creative Thinking There’s an old maxim about how before you build your...

Happy Halloween to all! Stay safe out there! 🎃

✨78 Raymar Place✨ is truly an entertainer’s

A house so GRAND we’re featuring it in two posts

This kitchen will inspire you! Visual Comfort ligh

Timeless elegance, classical architecture and the

Introducing 2552 Jarvis Street, in Mississauga! I

Featuring the second of our two NEWest properties: